My experimental work during the past 30 years suggests that single tissue cells have their own data- and signal-processing capacities that help them control their movements and orientation.

THE "FUNCTIONAL ANARCHY" OF GENOMES

Examples, based on my own work, that genome hazards which mutate genomes 'recklessly' do not wreck the genomes but, on the contrary, may create amazing genome symmetries, functions and architecture, albeit with considerable help from natural selection.

The first 170 kb of the human X-chromosome (panel a) depicted by the GPxI method that assigns one of four
graytone pixels to each base (A stretch of 50 kb of un-sequenced bases are omitted). The framed section is magnified
to show that the motifs in the pattern do not repeat identically as they would in truly repetitive DNA (e.g.the computer constructed
repetitive sequence shown panel b). Instead, they are variations of
a motif.

How are vertebrate genomes able to find a particular gene among their several billion bases, even though the gene is encrypted in codons and fragmented into exons and introns?

Why do genomes represent the interlacing of two complementary, fractal sets of sequences? 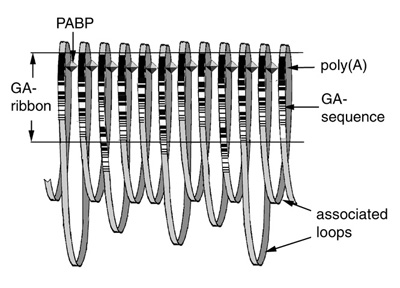 Examples of the self-similarity of the GPxI patterns of blocks of GA-sequences ordered by size and sequence.